With my guest blogging installments here on 1001 Scribbles over the past couple of years, I’ve probably spent at least as much time and space covering technically related matters as aesthetic ones, which is completely out of proportion with how I like to think about photography. The technical points (e.g. exposure, depth of field, etc.) are necessary, but photography—at least the way I think of it and try to practice it—is an artistic endeavor. Technique is important, but it’s a means to an end. Creativity is the itch most of us are trying to scratch, presumably, when we pull out our cameras.

So let’s talk about aesthetics a bit, and let’s do so in a way that’s as practical and applicable as possible. (I could discuss the matter in ethereal terms, but that’s an approach that many—if not most—people find impenetrable.)

Nearly half of the time during my trip to the Canadian Rockies earlier this fall was spent on a photo tour. While this was a tour—with a particular emphasis on time in the field—and not a workshop, we did hold a few brief nighttime classroom sessions that were designed, more or less, as reminders of broad photographic principles. I was quite pleased to see the discussion about image making center around three broad concepts that I’ve long preached as the key elements of successful photographs: subject, light and composition.

Essentially, assuming good technique, when these three things come together in a single frame, a portfolio quality photograph ensues. It’s not that you can’t have a “successful” shot without all three, but for something really and truly special, you need to check off all the items on the list.

Subject, of course, is the tangible object or objects that make up the elements present in the photograph. What constitutes “interesting” subject matter can be quite subjective, of course.

Light is self-explanatory. What isn’t quite as obvious, however, is that what constitutes good light can vary depending on the subject. For instance, as I’ve said multiple times in this space in the past, the quality of light that is particularly flattering to a grand landscape scenic isn’t necessarily the light of choice for a waterfall or a forest composition.

Composition is the most subjective element of all and the one upon which the photographer can exercise the broadest control. The term refers to what is included in the frame and the perspective by which the subject is depicted. This is entirely up to the photographer.

Let’s look at an example, one in which I think the three broad concepts outlined above come together pretty well. 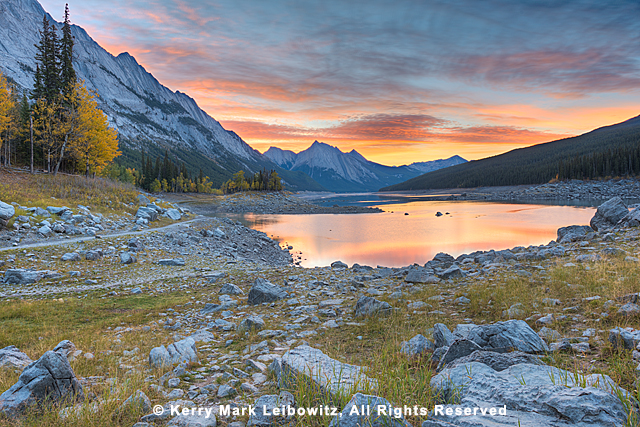 The subject here is pretty straight forward: we have a lake, lined by deciduous and coniferous trees on the left. It’s pretty clearly an autumn image, given the color of the foliage. We have a nice sunrise sky, reflected in the lake, and a backdrop of mountain peaks. There may be a few curmudgeons out there who would disagree, but I think it’s fair to say that most people would probably find this subject matter appealing.

The light is of the pre-sunrise variety. The sky is lit up beautifully while everything else is softly (and evenly) lit. Harsh contrast is avoided.

The composition was carefully determined. There’s a rocky meadow, filled with tall grasses, surrounding the side of the lake from which the image was made, and it was consciously decided to include the meadow and its components as foreground elements. The yellow aspens provide a clear sense of the season and complement the lake, rocks and mountains nicely. The mountains, as background objects, are perhaps the ultimate example of stopping the eye from wandering off into oblivion. The colorful sunrise sky (and its reflection in the lake) provides something of a “wow” element to an already compelling scene.

It’s a matter of opinion—it is art, after all—but I think all three of the aforementioned concepts come together quite nicely here.

Let’s take a look at one more image.

The subject matter is, at least superficially similar to the first image—though we have a foreground stream rather than a lake.

The composition is fairly dynamic—as revealed by the rushing outlet stream—which complements the boldness of the high contrast black and white treatment, particularly as it’s rendered in the sky.

Again, I think the three principles come together quite well in this shot. It’s a very different combination than in the original image, but both photographs share a certain amount of success. This illustrates the point that there are different ways to fit the three concepts together; there’s no single recipe to success. (If there was, there would only be one kind of pleasing image, which is absurd.) The goal is to find different ways to make different subjects, qualities of light and compositions work together symbiotically. That’s the road map to successful image making.

Give it a try. Consciously question yourself—what light flatters this subject? How can I choose to frame this subject in this light to best express it? What subjects work best in this light? By asking—and answering—these questions and others like them, you can take your photography to the next level.