A few years ago I was on a waterfall shoot with a sizable group of people. (The “sizable group of people” scenario is far from my preferred modus operandi, but that’s a story for another day.) We arrived at a waterfall—Ludlow Falls, in Miami County, Ohio—that presented several challenges. Ludlow Falls is located on Ludlow Creek, which is as wide as most rivers at the point of the falls, but access to the waterfall is limited. You can walk down to the riverside with relative ease, but the falls are hundreds of feet away from the nearest exposed section of riverbank. To make things more difficult, there’s a (very unattractive) concrete bridge that carries a roadway and spans Ludlow Creek almost immediately above the waterfall.

When the group I was with arrived at this location everyone more or less automatically collected at the same riverside spot, pulled out a telephoto lens and went about the task of taking head-on shots of one type or another of Ludlow Falls. Everyone, that is, except me.

I sized up the “conventional shot” with a sidelong glance and pretty much immediately deemed it unappealing. I then went about exploring location to see if I could come up with something more interesting.

I thought—as I almost always do—that finding and expressing a different perspective—with a distinct foreground, middle ground and background—would help produce a more three dimensional feel using a medium that is, obviously, two dimensional in nature. The way to do that, I quickly concluded, was to incorporate elements of the creek. There was absolutely no way to do so without actually climbing into the creek itself and navigating my way to a series of rocks that were roughly 35 feet away from the riverbank.

Fortunately I had the appropriate footwear to do this. Since I had known that the focus of the shoot (waterfalls) would lead us to be around water, I was wearing a pair of waterproof knee-high rubber boats (as I always do when I expect to be around something wet). The water level of the creek at this point was below knee level, so, using a combination of rock hopping and wading, I made my way in the direction of the aforementioned rocks. I propped my tripod up on one of the rocks and then maneuvered around in the water, camera in hand, to try to find the ideal composition. Once I did so, I retrieved my tripod, set up, and produced the image (which you see below). 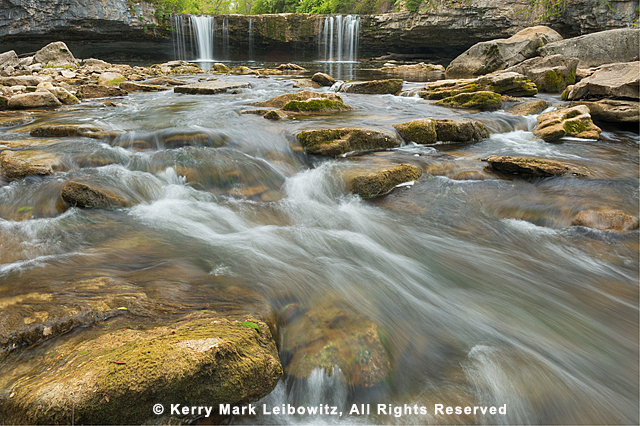 When all who were present that day subsequently shared images electronically, via a Web-based forum, the other attendees all heaped praise on my photograph of Ludlow Falls. It was “so different.” I had really “demonstrated outside the box thinking” in obtaining my shot.

So what’s the point of my story? Am I patting myself on the back because I’m a “better” photographer than the people I was with that day? No. What I was—at least that day—was the better prepared photographer. I was one of only two people who had brought waterproof footwear. What I had done wasn’t even an option for most of the people who were in attendance (though several of them, after seeing me wade into the creek, moved away from the “conventional” position to see if there was anything they could do with a different perspective).

I was also—again, at least that day—the more thoughtful photographer. I didn’t simply settle for the most obvious, easiest-to-access vantage point. (A clear view doesn’t always equal a compelling view.) Even the one other person with waterproof footwear that day didn’t bother to attempt anything but a snapshot of the conventional view (much to her chagrin, she later told me). She snapped that conventional shot, packed up and left, without even bothering to investigate other options.

Composing landscape photographs is about “seeing,” but in order to do so you have to give yourself a chance. That means exploring different perspectives and that, in turn, means being prepared to be able to move around and investigate. Sometimes the “better” shot is available only if you’re patient and inquisitive.