There are plenty of good reasons to photograph in places with which you’re already familiar.  When you shoot in familiar spots, you have the advantage of knowing the ins and outs of the location.  You already know the subject matter worth shooting and the conditions that are most flattering to those subjects.  Essentially, there’s a bigger bang for the buck when you photograph in known locales; less time and energy need be expended searching out the best subjects and perspectives—these are already known quantities.

Allow me to illustrate the point with an example.

In early February, 2011, the American Upper Midwest was hit with a genuine blizzard.  I was in northeastern Illinois at the time and we received an estimated 21 inches of snow, accompanied by sustained winds of more than 40 MPH and gusts of better than 60 MPH.  I saw drifts that were more than four feet deep.  Almost as soon as the snow stopped, the skies cleared and the sun came out.  Sunshine immediately after a substantial snowfall is so rare in my part of the world that I had to do a double take.  The notion of having the opportunity to work with woodland shadows on fresh snow was something I’d been hoping to do for years and I had to strike while the iron was hot (so to speak).

Traveling in the immediate aftermath of this blizzard was almost impossible.  In fact, people were asked to stay off the roads for nearly a full day after the snow stopped falling so that crews could do their work clearing all the white stuff.  I honored this request, but the very next afternoon–the back end of a full day of sunny skies–I was free to move about.

The situation clearly called for leveraging a familiar place, a spot that I knew had the kind of tall tree trunks that would cast shadows in a utilizable direction.  Because of familiarity, I knew just where to go and I made my way, with considerable difficulty, to a spot in the nearby Morton Arobretum that I was certain would work.  You can see the results below. 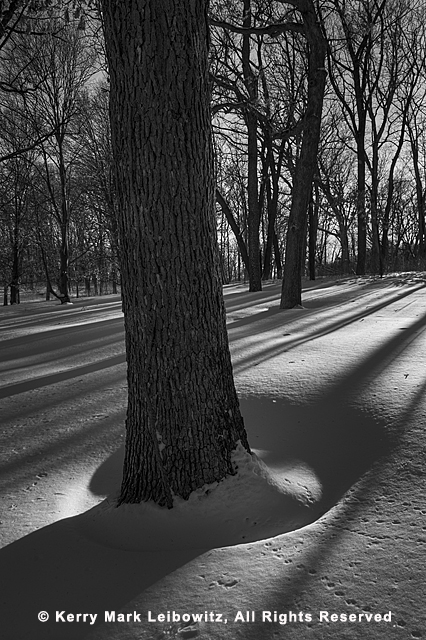 This is a perfect example of what I mean about the advantages of shooting in known locations.   The thought of trying to find a new place—with two feet of snow on the ground—that would allow me to realize my vision is one I don’t—and didn’t—covet.

All of this surely reads as a paean to simply going back to the same spots over and over again—and certainly there’s much to be said for that.

But, in my experience, it’s not only a good idea to change things up from time to time—it’s crucial.  Ultimately, the problem with familiar places is that they’re…well, familiar.  Inevitably, if you see something regularly enough, it becomes prosaic—at least in your mind.  Things that will seem new, different and noteworthy to a fresh pair of eyes are simply part of the background to you.

Going to a new location will force your brain to do a reboot.  Exposing yourself to new stimuli will force you to look at things differently, precisely because they’re unfamiliar.  This happens to me every time I step outside of the Midwest scenes I’m so used to and immerse myself in a different environment.  Last year, when I took two trips to the deserts and canyons of the American Southwest, I experienced this reboot again.  Dealing with scenes like those immediately below—which simply don’t exist in the Midwest— for days on end forced me out of a somewhat stale comfort zone and made me take a fresh look at the landscape.

But the benefits of the reboot went far beyond the real time experience in new places.  When I returned to the Midwest and went out with my camera, I viewed things with a fresh set of eyes.  Subjects that I might have taken for granted previously seemed new and I treated them as such.  It made for some imagery that might otherwise not have existed at all. 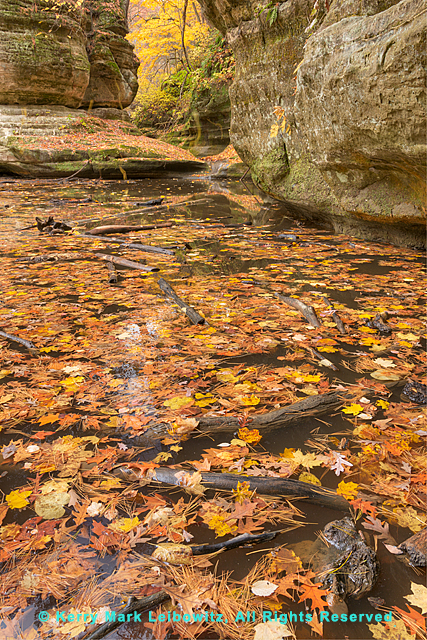 So the benefits of the reboot are—or at least can be—cumulative.

In the end, my recommendation—mealy-mouthed thought it may seem is to do both—shoot in familiar places, absolutely.  But don’t eschew the opportunity to reap the benefits of exploring new ones (and the more different they are from what you’re used to, the better).  You may find value in extending this principle to the genre of photography you spend most of your time with as well.  I occasionally dabble in macro photography to keep my eye for landscapes from getting stale.

In the end, a change of pace may be just what the proverbial doctor ordered.  Your photography—all of it—will thank you later.