During my time in college, I was fortunate to participate in a summer abroad program that sent small groups of students overseas to complete various projects. Projects included everything from building recycling centers in Ghana, weaving with the natives in Peru, preserving the Maori culture in New Zealand and for me, teaching English using the arts in China. I had danced for nearly 20 years and had taught for many of them but never had I used dance as a medium for ESL (English as a Second Language) instruction.

I was assigned a class of elementary students at an organization in rural China that houses children and orphans who had been infected with HIV/AIDS. As I prepared lessons for my elementary students, I incorporated American songs about colors, numbers, animals, and directions of movement – I would teach them the words in English and they would have to listen for the words as they danced to the songs. I couldn’t wait start teaching on the other side of the world! A week before I was scheduled to fly into Beijing, I received notice that I would no longer be teaching English for the elementary students. The Chinese government did not want American students working with the HIV/AIDS organization and if we wanted to be let into the country, we had to change our plans.

—
For 4 weeks, I lived at Tianjin Normal University (TNU) in downtown Tianjin, China – a bustling city with 13 million people and one of China’s largest cities.

Tianjin is about 90 minutes outside of Beijing

I spent 2 weeks teaching dance to middle schoolers (6th and 7th grade) and high schoolers (11th grade) that already knew English fundamentals. They could communicate in [very rough] English and were more interested in American music, dance and culture. A large part of teaching is being adaptable, particularly to students’ needs and abilities. While I had prepared basic English lessons for very young students who did not know English, it was clear that my lesson plans would not be of any use to my new group of students. So I had to make up new lessons on the spot!

Armed with all the Michael Jackson songs (ironically, Michael Jackson died just days before I started my teaching), High School Musical songs and well-known American songs like The Hokie Pokie, Cupid Shuffle and Chicken Dance, my new focus was teaching American culture through music and dance. Along the way, the students would learn some new English words as they related to music and dance culture of the U.S.

To help the students comprehend, we would write the English lyrics to High School Musical songs on the blackboards so the students could follow along as we sang to the music. Once they felt comfortable with the words, I would teach them a series of dance steps that they could perform while singing. They loved it! Many of the older boys were very shy at first – embarrassed to dance and sing in front of their female classmates and in front of the Americans. But after a few rounds of singing and silly dancing, the boys were having just as much fun as the girls. 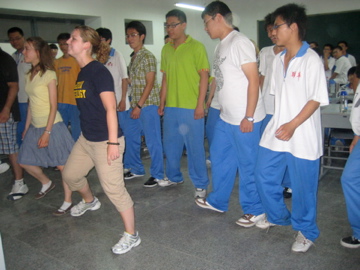 Another tool we used to help teach conversational English and American culture was the use of Arts & Crafts. We wanted the kids to be creative and use their imaginations, so we instructed them to make masks out of the various supplies we had brought from the States (pipe cleaners, colored paper, puff balls, and glitter). After the project, they would present their masks to the class (in English) and explain their designs. While the students made their masks, we would sit at their tables and talk with them (in English) about life in China, school… we’d answer their must-know questions about American culture – usually which celebrities we thought were the “most handsome.” (Even when discussing Hollywood, the Chinese are still modest). 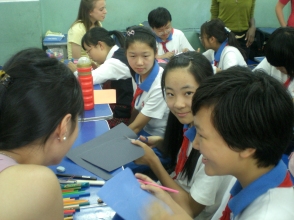 My remaining time in China, I worked with university students from TNU who were studying education. All had a very good understanding of written and spoken English and could communicate very well. These “students” were the same age as me and I focused more on a cultural exchange with them rather than the actual teaching of English. They were still very interested in dance and wanted me to play Michael Jackson and High School Musical over and over again for them. So I decided to teach them a 2-minute hip hop dance that they could practice, show their families and teach their friends. Because hip hop is now thought of as an American style of dance, I thought it fit well our exchange. 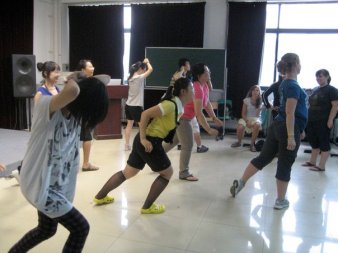 The students were so excited to learn “American dance like you see on television” that they forgot about teaching us Chinese songs – they just wanted to keep dancing! So I taught them the Cupid Shuffle – a basic, group-dance song that is played at nearly every wedding in the U.S. The song that goes on and on, gets stuck in your head and is so addicting, you sing and dance it everywhere. The students really enjoyed it. 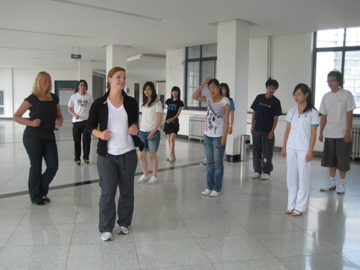 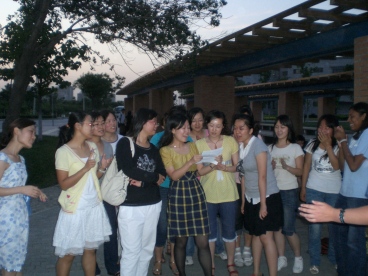 The Cupid Shuffle was such a huge hit in my teaching, that when the administrators at TNU heard about this “special dance” I was teaching their students, they asked me to teach it to them, too! During our closing ceremony at TNU, just a day before we were to leave the university and head back home, the Dean of the School of Education called me forward to teach the dance to all of the University’s administrators!

The Dean of the school is the woman in the black dress on the left and I am in the pink dress. 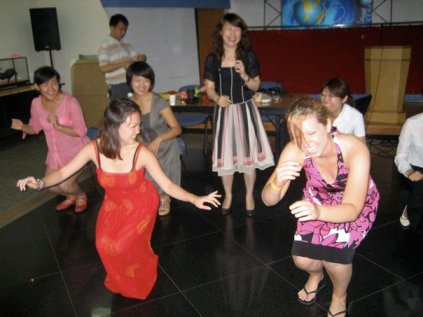 Sometimes I laughed so hard, I just about cried!

Teaching in China was a fantastic experience. It was wonderful for me to share my love of dance while helping students with their English. If anyone ever has the opportunity to go abroad and teach (be it foreign language, environmental awareness, anything), I highly recommend it! Even though I was the “teacher,” my students definitely taught me many things, too!